Britannula, off the coast of New Zealand, is a thriving republic. Three decades ago the government of energetic young men decided that compulsory euthanasia after the age of 67 would spare unnecessary suffering and state expense. But now, in 1980, some of those once-young politicians are now elder statesmen, facing very significant birthdays... 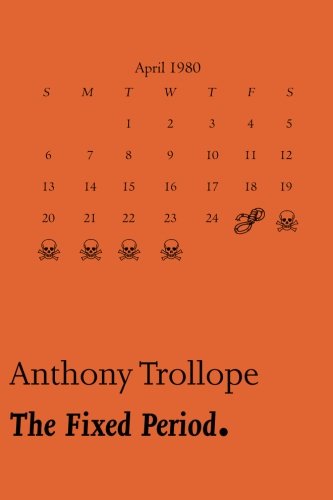 The Fixed Period is quite an oddity: Trollope does steampunk as grim social comedy. Its imagined 1980 features portable telephones, battleships launching city-busting shells, steam-powered bicycles and cars, and cricket played with huge teams and artillery-like mechanical (and steam-powered) bowlers. Its narrator, Britannula's elected leader, is a sad and convincing portrait of a well-meaning fanatic, pushing his 'utopian' vision of enforced euthanasia even at the expense of his best friend's life.


Available from Lulu, Amazon US and Amazon UK.
Posted by JRSM at 17:53 3 comments: 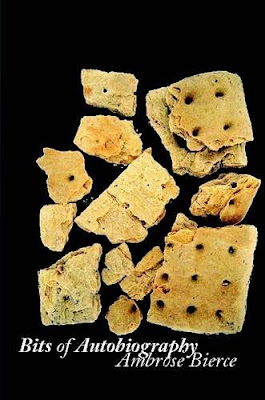 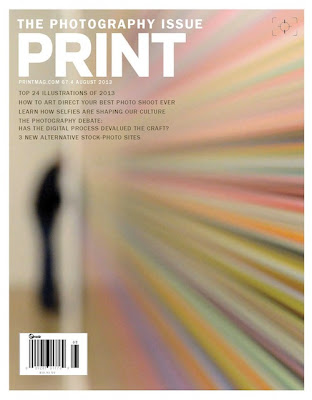 The new and expanded Whisky Priest Books catalogue is now online: see it here or visit here to download a copy.


Books coming later this year include Anthony Trollope's only science-fiction novel, novellas by Maria Edgeworth, and more.
Posted by JRSM at 15:27 2 comments:

I'm interviewed at the New York Times's technology site, talking about Whisky Priest Books and being your own niche classics publisher.

More Whisky Priest action later this year: a baby is on the way, eating my life at the moment.
Posted by JRSM at 19:02 No comments:

Apologies for the long gap between posts here--Amazon has been incredibly slow in adding the newest Whisky Priest titles, which were actually ready some months ago. Anyway, here we go!

The first new title is F. Scott Fitzgerald's play, The Vegetable, or From President to Postman.

An oddity in F. Scott Fitzgerald's career, The Vegetable was a satirical attack on the presidency of Warren Harding. An ordinary, incompetent man, taunted for his lack of ambition by his family, realises his dream of ruling the United States of America. One biographer described it as "inspired by the pervasive stupidity, gross cronyism and rampant corruption [of the] administration of the philistine president".

With appalling timing, the play was first staged just after Harding's sudden death, when the mood of national mourning meant that few were ready for a savage indictment of the dead president. It closed after one week. Bootleggers, political machinations, romance and a man on the run combine in this bizarre story from the side of of Fitzgerald which wrote The Diamond as Big as the Ritz. Out of print for decades, The Vegetable is a strange and significant work by one of the Twentieth Century's greatest writers.

The cover is a new piece of art entitled 'Drinks on the White House Lawns'. 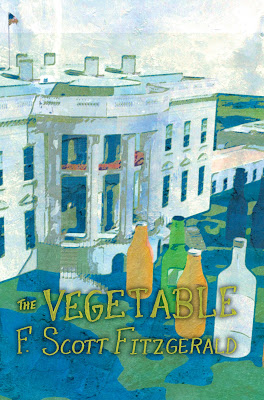 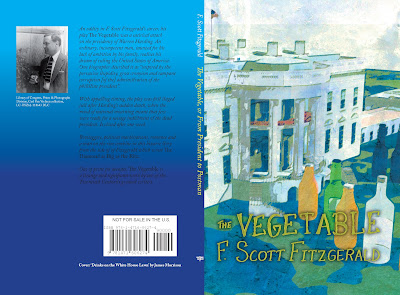 Sadly, not for sale in the US due to copyright restrictions. Copies available from Lulu , Amazon UK or here.

The second new title is a long-lost thriller by Hugh Walpole, Above the Dark Tumult. Walpole is an odd one--hugely successful in his day, and now almost completely forgotten and out of print. His big, ambitious books have not aged well, but his smaller-scale novels of suspense and crime have fared rather better: the best example is Mr. Perrin and Mr. Traill, recently resurrected by Capuchin Classics.


Above the Dark Tumult is a thriller set just after World War One. Richard Gunn is an ex-soldier in trouble. Jobless and starving in Piccadilly Circus, he encounters his nemesis, Leroy Pengelly. From this encounter the secrets of their shared past start to unravel...

Set during the course of a single night and entirely within the buildings of Picadilly Circus, Tumult is a classic ripping yarn.


“..a novel which combines elements of the horror and supernatural - at which Walpole was so skilled - with the puzzle element of the whodunnit - all wrapped up in one unsettling and uncanny whole.” —Therie Hendrey-Seabrook, 501 Must-Read Books

Copies are available from Lulu, Amazon US or Amazon UK. 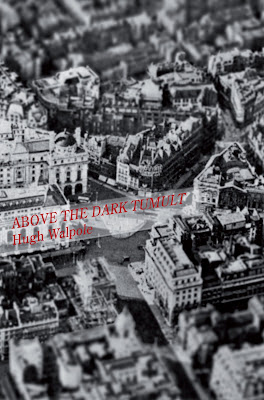 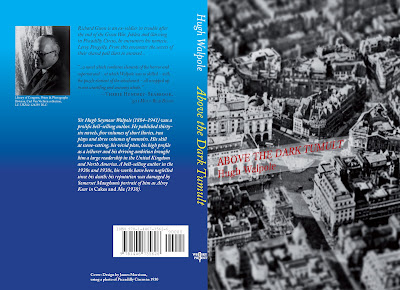 The cover makes use of a tilt-shifted photo of Piccadilly Circus in 1930. You can also find the text of the book online here.

A Romance of the Sea-Serpent: A Review

A fine and funny review of the Whisky Priest edtion of Eugene Batchelder's  A Romance of the Sea-Serpent, or the Icthyosaurus. Stolen from Amazon, (buy the book here or here, or here).

5 Stars: The Critics are Wrong 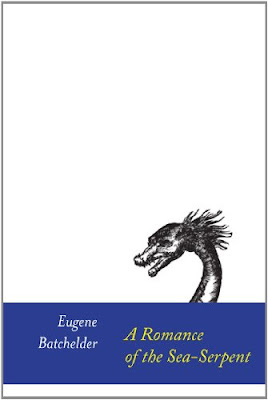 The description for this book cites from "Beneath the American Renaissance" by David S. Reynolds. Reynolds, like many others, considers "Moby Dick" a great American novel. He discusses Batchelder's work in passing. He sees this as one of many books which told tales of sea-monsters, and thus potentially influenced Melville. Unfortunately, his appreciation of great literature is clearly distorted: "A Romance of the Sea-Serpent" is by far the better work. Consider:

*Melville writes in everyday prose. Batchelder is a poet. Nearly every paragraph in this masterpiece contains at least one rhyme. These aren't forced, either. None of his contemporaries could pull of a clause that bests "out on the sea, out on the sea, the fleet is dashing merrily!" The best part of his verse is the way he mixes it up. The various rhyme structures - ABAB, AABB, ABCABC - come at you unexpectedly. They're often placed in the middle of paragraphs written in standard prose. Batchelder seems to be making a statement about the unpredictability of life: you never know what his next rhyme will be, just like you never know when a sea monster might walk onto land and eat you from behind.

*Romance: Females are only mentioned in passing in Moby Dick. Most of the time that they come up, it's in regards to how awful their love life is: Ahab or some other sailor has abandoned them for a life on the sea. This work includes well-rounded women doing all the things typical women do: they have strapping young lads sing for them, they attend balls, and they get eaten by sea monsters.

*If romance isn't your thing, don't worry. This book is too powerful for one genre, and can easily be described as an action tale as well. In Moby Dick, one needs to wait over 200,000 words before the sea monster starts tossing sailors around. Here, you don't even have to wait 10 pages, and the body count never stops adding up.

*The difference in ferocity is probably due to this monster's superiority over the white whale. Moby Dick is 100 feet at most. His Snakeship is over 600. He is the king of the sea - other sea-serpents, sharks, kraken, and whales (presumably white one as well) - do his bidding. At one point, he sics 40 serpents on one yacht. Also, I don't believe Moby Dick could walk on land or talk to people, and was certainly never offered a Harvard degree.

*Speaking of degrees, Melville's highest level of education was high school. Batchelder, like his monster, graduated Harvard. Ergo, Batchelder is clearly smarter and a better writer. This shows in passages possessing incredible metaphors and puns, such as this one, when a character doesn't feel like singing: "I feel, like the indigo, somewhat blue, but Sue will sing without much suing."

*"Call me Ishmael." I'm pretty sure I've been offered similar introductions on Greyhounds before. Batchelder opens up with the following, adequately setting up the thrillfest to follow: "unless you've strong nerves, just throw down the book, and never dare in its pages to look."

In short, don't waste your money or time on the overrated Moby Dick.
Posted by JRSM at 16:25 No comments: 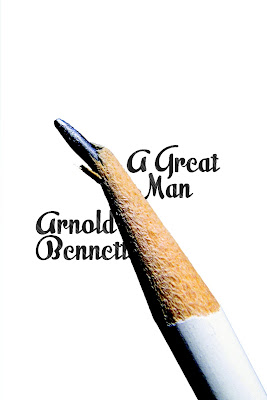 Arnold Bennett was extraordinarily prolific, which has probably one of the reasons he's no longer seen as the giant of literature he once was. But that's not entirely fair, because his best books really are great. He could also be very funny, and as someone who knew the Victorian and Edwardian literary worlds intimately, he was ideally placed to write A Great Man, a wonderful satire on writers and publishing.

It's a satire that still holds true for today: the financial and artistic wranglings between writers, publishers and agents; the sheer mass of books being produced every day; literary fiction versus commercial fiction... it's all there.

The hero, a sentimental novelist who views himself as the enemy of  what he calls 'the Stream of Trashy Novels Constantly Poured Forth by the Press', is also the owner of a delicate digestive system. Here, in an extract that will give you an idea of the style of the novel, is perhaps the finest description of an attack of vomiting ever given in an Edwardian novel:

It proved to be the worst dyspeptic visitation that Henry had ever had. It was not a mere ‘attack’—it was a revolution, beginning with slight insurrections, but culminating in universal upheaval, the overthrowing of dynasties, the establishment of committees of public safety, and a reign of terror. As a series of phenomena it was immense, variegated, and splendid, and was remembered for months afterwards.

A Great Man can be viewed and bought here.
Posted by JRSM at 16:47 No comments: